You are here: Home1 / About Mike Eldon

Mike Eldon is founder chairman and lead consultant of The DEPOT (The Dan Eldon Place Of Tomorrow), a management consultancy that focuses on leadership, strategy, change management, culture strengthening, performance management and coaching. He is also sought after as a speaker and writer on these and other topics.
He is the chairman of Occidental Insurance and an independent director of Davis & Shirtliff, which is in the water and energy sectors. There he chairs its Board Audit Risk and Compliance Committee.

Mike is an economics graduate of University College London and a Sloan Fellow of the London Business School. He entered the IT field in 1967, arriving in Kenya in 1977 to become general manager of multinational computer company ICL, and he has lived there ever since. He was a pioneer in the development of the use of IT in Kenya, and was deeply involved with the development of Kenya’s first national ICT policy.

Seventeen years ago he reinvented himself as a management consultant, and his clients include public and private sector organisations, family businesses, NGOs, the World Bank and GIZ.

He is a Senior Leadership Adviser to the UN Institute for Training and Research (UNITAR), and was an adjunct faculty member in the development and delivery of the transformative leadership programme for the Aga Khan University Graduate School of Media and Communications in their joint initiative with the Harvard Kennedy School. He is a Global Partner of the World Bank’s Collaborative Leadership for Development initiative, and runs high level workshops on leadership in Kenya and beyond, as well as being an executive coach.

He has been chairman of the Council of KCA University, and chairman of the Council of the Kenya Institute of Management, where he is a Fellow of the Institute. He was a founding director and later vice-chairman of the Kenya Private Sector Alliance (Kenya’s private sector umbrella body), where he is now a member of the Advisory Council; and he is a founder member of The Management Consultants Association of Kenya. He has also been a director of KEMI (the Kenya Education Management Institute) and of AFIDEP (the African Institute for Policy Development), a think tank that supports the actualisation of the Demographic Dividend.

Since 2007 he has been writing a column for Business Daily, having now published nearly 400 articles; and his 2009 book Kenyans, Yes we Can! is a collection of his articles and speeches. Mike is married to Evelyn Mungai, the author of From Glass Ceilings to Open Skies, for which he was the editor. In 2021 the Women on Boards Network presented him with the 1st Runner Up Award for being Male Champion of the Women’s Agenda. 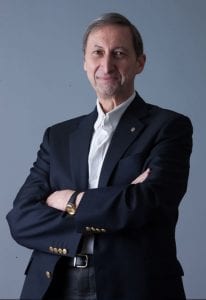 I started in the IT business in 1967, for the first ten years in Britain and then in Kenya, always in the cut and thrust of the vendor world.  I was the founder chairman of the Kenya ICT Federation, the private sector grouping that represents ICT in the Kenya Private Sector Alliance (KEPSA), the umbrella body that interacts with government on policy matters. By being a founder governor of KEPSA, and later its vice-chairman, I learned more than I ever wanted to know about why government finds it so hard to deliver. I’ve also enjoyed a long relationship with the Kenya Institute of Management, where I am a Fellow and where I was chairman of its council for three years.

I have now re-invented myself as a management consultant, and I write a regular column in the Business Daily, where over 200 of my articles have appeared. My book Kenyans, Yes we can! was published in November 2009.

Read more about what I do!

I am also involved in various other bodies, some commercial and others voluntary. I am a non-Executive Director of Davis & Shirtliff, the regional specialists in water equipment and power; of Hotpoint Appliances, the local distributor for Samsung, LG and others; and of think tank AFIDEP (African Institute for Development Policy). I’m the chairman of the council of KCA University; I am on the Council of the Kenya Education Management Institute, the government body that trains all the country’s head-teachers and their deputies; and I have been an active member of the Rotary Club of Nairobi for 36 years. My wife Evelyn and I drive a village empowerment programme in rural Cura.

I’m an Economics graduate of University College London, and a Sloan Fellow of the London Business School.

What I really enjoy is interacting with people, from the young to the old, from the most junior to the most senior, helping them to find their way in life and to align their energy with each other. I’m passionate about seeing people – not least me – have a great time while achieving great things. One of these days, when I have a little more time (ha, ha!) there should be some more books.

Kenyans, Yes We Can

A few years ago I decided it would be nice to pull some of my speeches and writing together in book form, and happily Jacaranda Designs were up for working with me as publisher. But how to select which pieces to include? As my wife and I were browsing through the material, she spotted that what bound much of it together was a spirit of hopefulness. And that’s what led her to proposing the title, Kenyans, yes we can! It also rather easily enabled me to select which articles were aligned with that message. Close to eighty made it into the book, which I divided into five sections, each representing a theme:

Read more about my book
Scroll to top